Toxic Chemical or Tooth and Bone Savior?
You Decide

Fluoride has always been known to most of us as the stuff in toothpaste or you water that helps keep your teeth strong and keeps you from getting cavities. This is what the government has been telling us for all our lives. And of course we can believe everything the government says and does is always in the best interest of its citizens. Can't we? (Not sure if you could read the sarcasm in that sentence that was intended to be there!!)

However, to be completely fair, there was evidence used by the powers in charge that led them to believe that putting fluoride in water was a good thing. But that was a long time ago and now there is evidence that some harmful facts were kept hidden.

So is Fluoride a toxic chemical or something you should be adding to your system. That is a question you have to answer on your own, but for me personally, I choose to aviod as many man made chemicals as I can.

History of Fluoride Use

Fluoride was first introduced into the American water supply in the 1940's in Grand Rapids, Michigan. Based on research and studies started by Fredirick McCay back in 1901 the introduction of the fluoride into the water supply was intended to help prevent tooth decay.

McCay and others had found that fluoride naturally occuring in various water supplies around the country stained teeth, especially those of children, a brownish color but also created teeth resistant to decay. By studying the levels of fluorine water, the scientists were able to determine a level that wouldn't produce a heavy stain but would promote less tooth decay.

Since that time almost 70 years ago, there has been nothing but controversy about the use of fluoride in water supplies. Many countries followed the United States and began fluorodating their water supplies but many of them have also stopped. Here is a list of some of those countries with the dates they used the fluoride.

Canada, the United Kingdom, Australia, the United States and Ireland are the major countries still using fluoride in their water supplies.

For the past 70 years there have many claims for and against putting fluoride in the public water system. As you can see from above, many countries have stopped using it and there are quite a few cities and towns within the U.S. that have also stopped.

Here are just a few examples I found on why many people, including many doctors, dentists, and scientists, are against putting fluoride in water.

I found many statements from various sources stating that fluoride is: 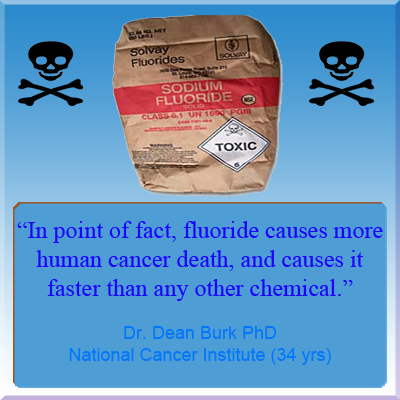 What should you do?

That is a tough question. It's tough to avoid water since it is critical to survival.

But it really comes down to "who do you believe". Read some of the research and information found by doing a quick internet search. Then decide for yourself if you want to reduce your fluoride intake.

If you decide to cut back on the man made chemical introduced into your life there are a few things you can do.

First, stop using fluoride toothpaste. There are a few brands out there.

Second, find out if your city adds fluoride.

Third, if you have fluoride added to your water you can filter the water to remove it. It is my understanding that a regular carbon filter will NOT remove fluoride. But I have also read that it will remove some of the man made chemical fluoride that is injected into your water supply but not the naturally occuring fluoride found in most water supplies. However, Reverse Osmosis filters will remove fluoride. They are not as inexpensive as the counter top carbon filters so that is a decision you will have to make on your own.

Get your teeth clean without a lot of additives or artificial sweeteners!

Enjoy the Benefits of Clean Teeth without all the additives.