The Consumer Federation of America in 1997 reported that poor respiratory health, which includes the asthma rate, has tripled in the last 20 years. It was once a very rare health problem.

The Center for Disease Control stated there has been a 42% increase in asthma (29% for men, 82% for women).

It is believed the higher rate for women could be due to women's longer exposure times to household chemicals. I personally read in many recent articles that stay at home moms have an increased rate of cancer due to the chemicals they use to clean house, do dishes, laundry, etc.

The National Center for Health Statistics reported the average child visited the doctor 23 times in the first four years of life, with the most common complaint being one of poor respiratory health.

Environmental Health Threats to Children from the Environmental Protection Agency reported asthma death in children and young people increased by a dramatic 118% between 1980 and 1993.

According to the National Heart Lung and Blood Institute, if you have asthma, the inside walls of your airways are inflamed (swollen). The inflammation makes the airways very sensitive, and they tend to react strongly to things that you are allergic to or find irritating such as the fumes from many common household products.

When the airways react, they get narrower, and less air flows through to your lung tissue. This causes symptoms like wheezing (a whistling sound when you breathe), coughing, chest tightness, and trouble breathing.

The lungs and the capillaries in the lungs constrict or tighten up. One reason they do this is to minimize the loss of water during respiration. So, could water, which re-hydrates the body help the body breathe better?

Its something to think about!

Dehydration plays a significant role in respiratory health. Based on a study, one researcher believes a lack of water vapor in the lungs can cause the airways to constrict and the lungs to produce mucus. These are the two factors that cause a respiratory attack such as asthma. 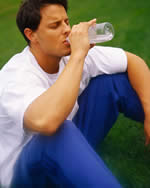 As mentioned previously, the occurrence of asthma in children has increased over the last decade. Many experts and studies suggest that this is partially due to children's increased exposure to environmental toxins and their decreased ability to detoxify their body. It also suggests that because a normal child consumes much more water per pound of body weight than an adult does, they are getting a bigger dose of any chemicals in their water‚ and their developing bodies are more sensitive to the harsh effects. Another reason we need to take steps to drink clean water.

And if that wasn't enough, many drugs leave the body in a state of chronic dehydration. With that condition, organ malfunction, kidney stones and unhealthy blood can be created. In a book by Dr. Batmanghelidj, Your Body's Many Cries For Water: the Dr. claims that most health problems are caused by dehydration. He states our brain is more than 80 percent water. So it only makes sense if we lose water, we can lose consciousness and death can follow. He also states a lack of water can cause high blood pressure, reduced heart health and high cholesterol.

An attack on your breathing can be triggered by different things, It varies among different people but basically anything that irritates or affects your lungs and airways can trigger a respiratory attack. The following list points out some of the more common triggers.

Allergies and poor respiratory health are both an indication the body's immune system needs to be stronger. Noxious fumes from cleaners, laundry products and air fresheners affect the health of the lungs and immune system. Besides changing household cleaners to non toxic products, purifying the air in the home is also a good idea.

It once again comes down to what we are doing to and for our body. We take the body for granted and then give the responsibility to someone else, mostly the medical profession and pharmaceutical companies to "cure" our ailments.

The effectiveness of Vitamin C against respiratory conditions was first done in the 1930's. Please visit our page about Vitamin C and learn how it can help in improving your respiratory health.

I know of many families that have "done away" with the problems associated with respiratory health symptoms just by following a few of the previous suggestions.

Get Clean
Natural Biodegradable Cleaners that are SAFE, POWERFUL, SMART and GREEN.

Return from to HealthyLife Home Page